A hint from 50 Cent claims he has bought the rights to make a movie based on Tekashi 6ix9ine’s case and life. After a fan asked the rapper if those rumours are true, he avoided an obvious statement by responding “I’m working boy”.

6ix9ine, whose real name is Daniel Hernandez, is currently testifying in an ongoing racketeering case against two alleged members of the Nine Trey Gangsta Bloods gang – Anthony ‘Harv’ Ellison and Aljermiah ‘Nuke’ Mack– in an attempt to reduce his own prison sentence. 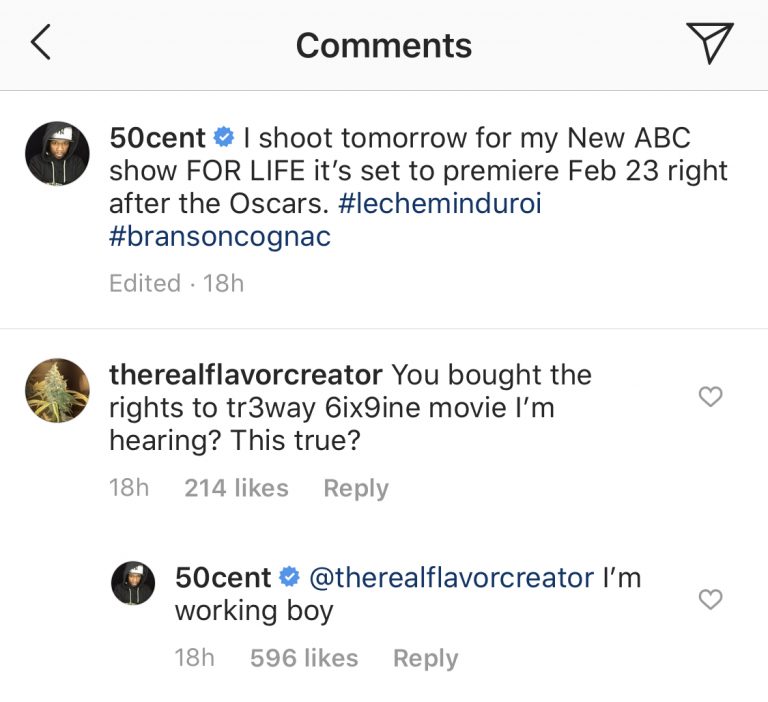 Earlier this year, he pleaded guilty to nine federal charges including ones relating to racketeering, conspiracy, firearms offences and drugs trafficking.

Once and friends and collaborators, 50 Cent has distanced himself from the rapper who is facing 47 years in prison on federal racketeering charges after being a mentor for him once. Speaking on his relationship with Tekashi, 50 Cent told The Breakfast Club earlier this year that the rapper is “his mother’s child now. After you do shit like that, you’re your mama’s child. Don’t call me.”

While it is still unclear if a movie on Tekashi’s life is on the way, rapper ScHoolboy Q already tweeted that he wants to be part of the film. Saying “I Hope I get a role in it. I just wanna play one of tHe snitcHes” and “I can def get away wit playing 6 9 on da B.E.T Version.. I’m all in”.

THe 6 9 movie gone be crazy... I Hope I get a role in it. I just wanna play one of tHe snitcHes

50 Cent’s is no stranger to finding success on the small and big screening, with hit TV show’s “Power” and “For Life”, which is planned to premiere following the Oscars on February 23rd on ABC, under his belt. Besides these projects, he is also working on a ‘Power’ spinoff called “Power Book 2: Ghost”.

Ja Rule Cleared From Fyre Festivals Lawsuits
Tue, 11/19/2019 - 14:25
Ja Rule has been cleared of wrongdoing in a major lawsuit that aros